Six years ago, SloCo Founder Dr. Rebecca Cliffe launched a major research project into sloth genetics in Costa Rica. She started this project because she was concerned with the number of wild sloths in the South Caribbean region that are being born with debilitating birth-defects (missing fingers/toes, malformed ears, and misshapen limbs), and she wanted to know what was happening.

The results of this project have now been published and they reveal an unexpected situation with far-reaching implications for future sloth conservation and rescue efforts.

In order to find out what is really going on, we collaborated with Dr. Chloe Robinson, Swansea University and the Sloth Sanctuary of Costa Rica to undertake the first exploratory investigation into sloth population genetics in Costa Rica.

We collected hair samples from 98 two-fingered sloths (Choloepus hoffmanni) that originated from different regions throughout Costa Rica and used microsatellite analysis to look at the population genetics.

We made 3 important discoveries regarding sloth genetics:

Finally, after many years of hard work, we are delighted to announce that the results of this research have now been published as an open-access article in Evolutionary Applications. We have summarized the results below.

We were able to identify 4 genetic groups of two-fingered sloths in Costa Rica (this is similar to having 4 genetic origins). If you are familiar with Costa Rican geography, these are the groups that we identified: 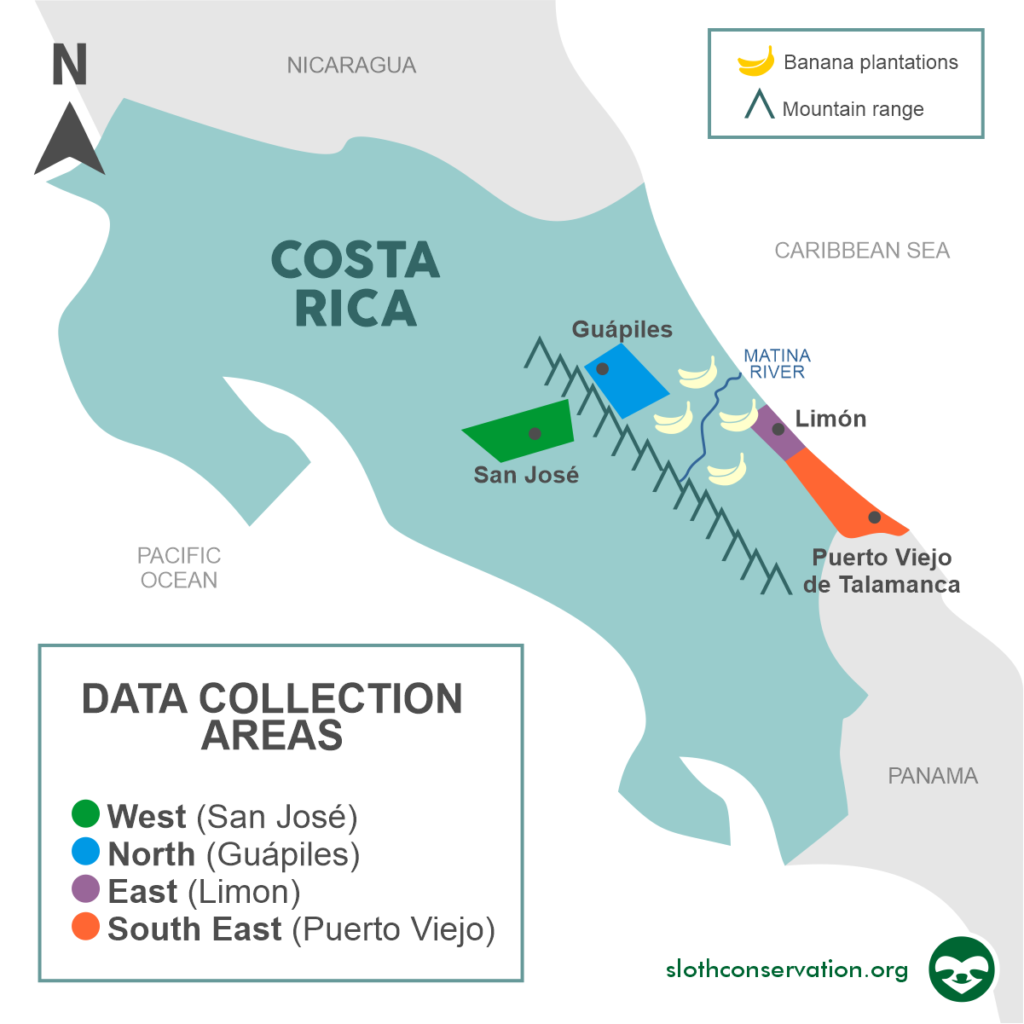 It is important to note that there are probably many more groups than the four that we identified, but for logistical reasons we could not collect samples from sloths spanning the whole country. Our results only reflect the areas where we were able to focus our sampling efforts.

1) Sloths in the North are genetically distinct.

Sloths in the ‘North’ group were found to be genetically very distinct when compared to the other populations. This means that sloths in this region are substantially different from sloths in other areas of Costa Rica that we sampled. We suggest that it may be important to recognize this sub-population as a separate unit for management and conservation purposes.

A distinct sub-population like this is sometimes referred to as an Evolutionarily Significant Unit (ESU).

Sloths in the ‘West’ group have higher levels of inbreeding, (when individuals who are closely related reproduce). This may not be surprising when we consider that sloths here are restricted to living in severely fragmented forest pockets within the highly urbanized San Jose region.

This suggests that we need to focus more conservation and research efforts in this region to better understand the long‐term effects of habitat fragmentation.

3) Sloths have been moved around by humans.

Finally (and perhaps most importantly), we discovered that sloths in the West, East and South East groups were all surprisingly similar. This close relatedness between sloths living on opposite sides of Costa Rica is an unexpected and potentially concerning result. Particularly when we consider the vast geographical distance between these populations and the inability of sloths to travel long distances.

Interestingly, sloth populations in the South Caribbean were found to be more genetically diverse and had high levels of admixture (which means lots of sloths from lots of different origins have been reproducing with one another).

All of this points towards the translocation of sloths by humans in Costa Rica, where individuals have been removed from their areas of origin and released somewhere else. 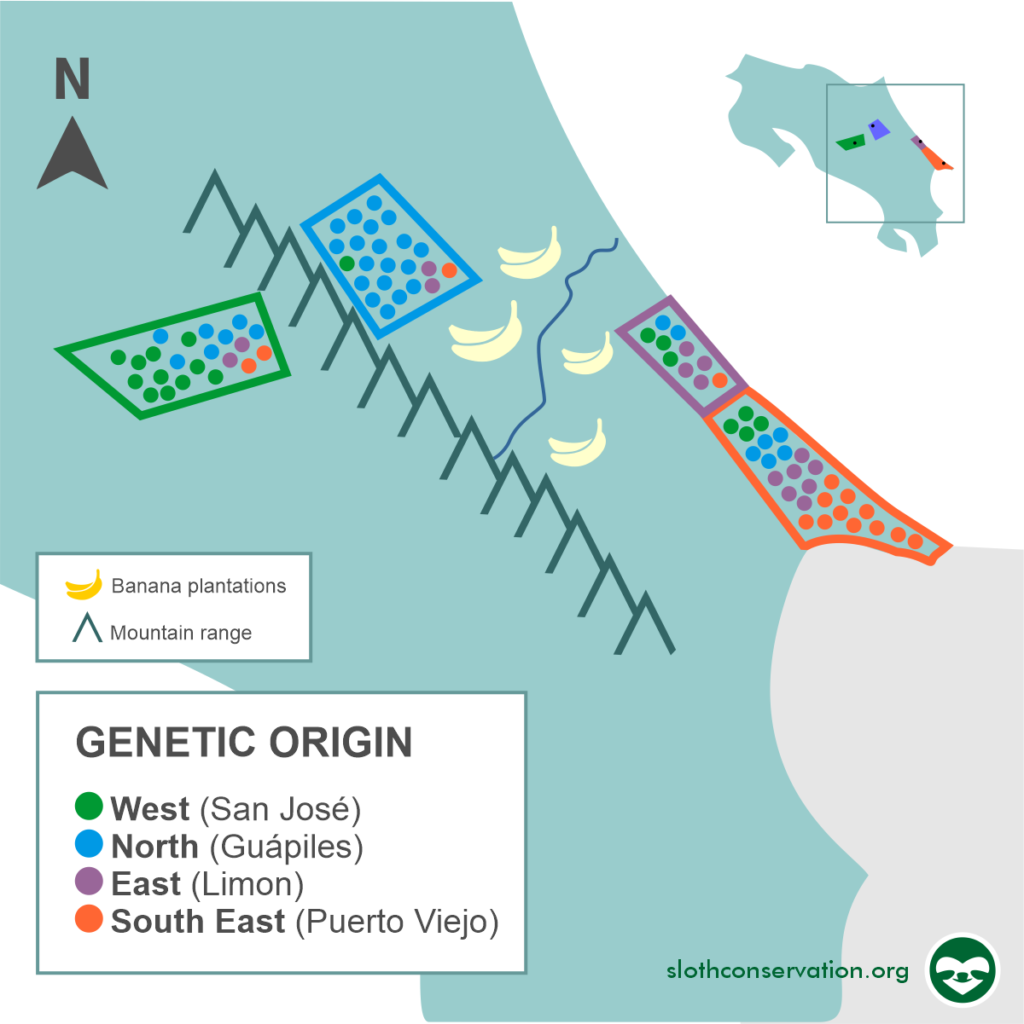 How could this happen?

When we consider that approximately 3 – 4 sloths are admitted into rescue centers every single day in the South Caribbean, it is not surprising that some of these animals may have originated from further away.

The translocation of wildlife was particularly prevalent in earlier years when there were not as many rescue centers who knew how to properly care for sloths. The government of Costa Rica (and in one case a national airline) would regularly deliver inured sloths from all over the country to the Sloth Sanctuary on the Caribbean Coast as they were considered to be the only experts in sloth rehabilitation at the time.

This has since changed. In the last decade there has been an explosion of new rescue centers. Costa Rica now has more rescue centers per square mile than any other country, with over 250 registered facilities currently rescuing and rehabilitating wildlife! The current abundance of rescue centers means that the cross-country translocation of sloths may be less of a problem, but the regulation of release protocols is more difficult.

Is this mix-up of sloth genetics a bad thing?

We do not know, but it could be.

You may think that high levels of genetic diversity are considered to be a good thing in wildlife conservation – and this is true. Increased genetic diversity means less inbreeding has occurred and gives populations a stronger ability to adapt when faced with change.

However, as with most things, it is rarely that simple. Mixing individuals from different genetic backgrounds can also have a dangerous effect on the health and viability of populations through a process called ‘outbreeding depression’. 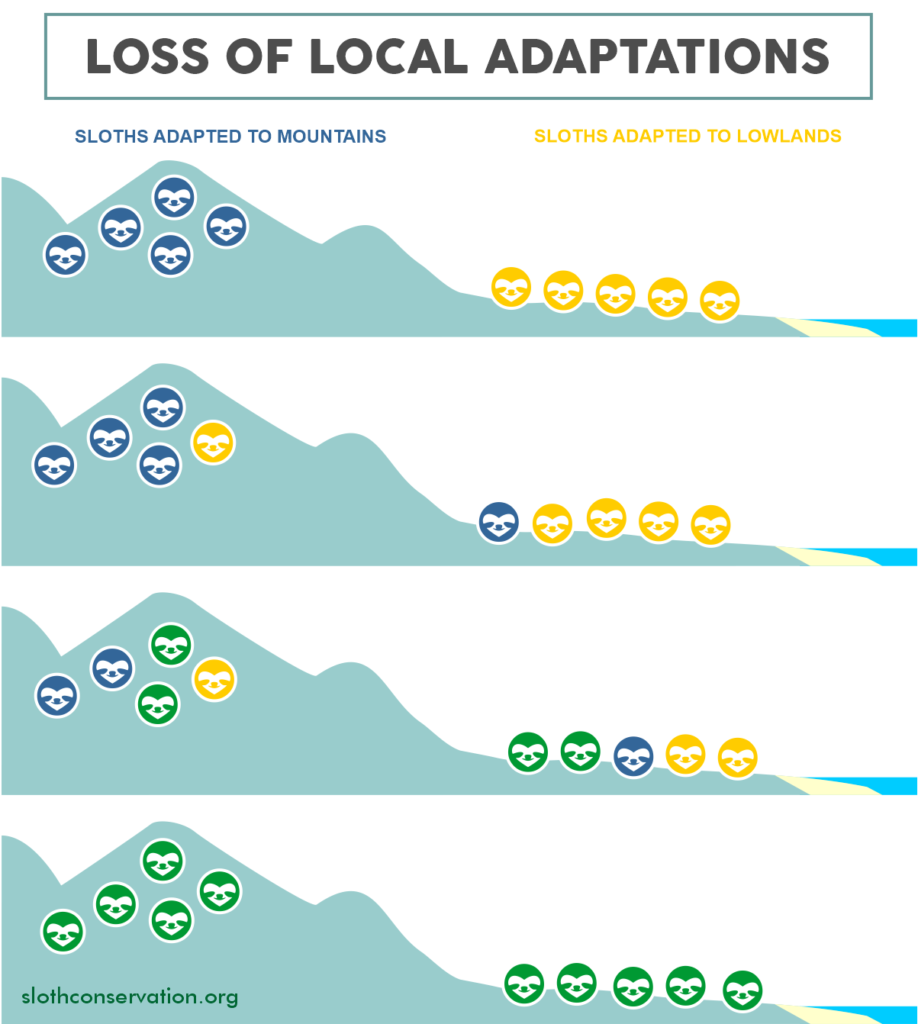 Animals often have unique genetic adaptations that help them to survive in the particular environment in which they live. For example, sloths that live in cold montane regions have adaptations to cope with a colder climate, including longer, thicker, and darker hair compared to their lowland counterparts. By moving individuals around, these adaptations can be lost and the inter-breeding that occurs can negatively impact the health of these populations.

A similar situation was recently discovered in orangutans that were reintroduced to the wild from rescue facilities in Borneo without knowledge on the genetic background and subspecies status of the individuals.

In line with this, there is an emerging global awareness of the need to consider the genotypes of animals prior to release, including official guidelines and recommendations set out by the International Union for the Conservation of Nature. However, in Costa Rica, there are currently no existing protocols or legislation to encourage or regulate this practice.

What does all of this mean for sloth conservation?

The genetic diversity between separate sloth populations have emerged over the course of millions of years. By mixing together populations that perhaps haven’t been in contact for millennia, we are potentially causing irreparable changes.

It may be that inter-breeding sloths from different genetic origins has no negative effects at all. But what if it does? Suddenly, we will have inadvertently compromised the viability of wild sloth populations and no amount of conservation work can ever reverse that damage.

Is it worth the risk? 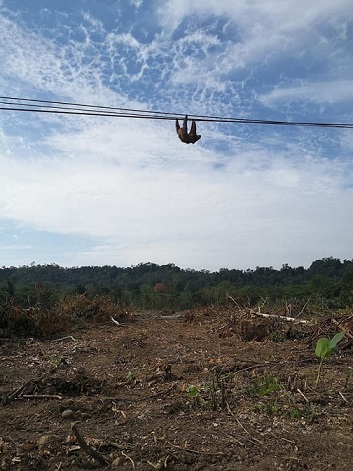 This discovery means that rescue facilities in Costa Rica should consider the genetic background of rehabilitated sloths when planning future reintroductions. Sloths should be released in the areas where they originated from whenever possible.

This will undoubtedly present a challenge for overburdened and underfunded rescue centers. Combined with increasing pressure for post-release monitoring, it may seem impossible for animals to be returned to the place of origin and simultaneously tracked to ensure survival.

Furthermore, it may not be possible to always return an animal to the place that it came from. There may be a lack of suitable habitat in that area, or the rescue center may not have accurate records on where the animal was originally found (rescued animals often pass through several pairs of hands before arriving at a rescue facility, and tracking down the origin can sometimes be difficult). 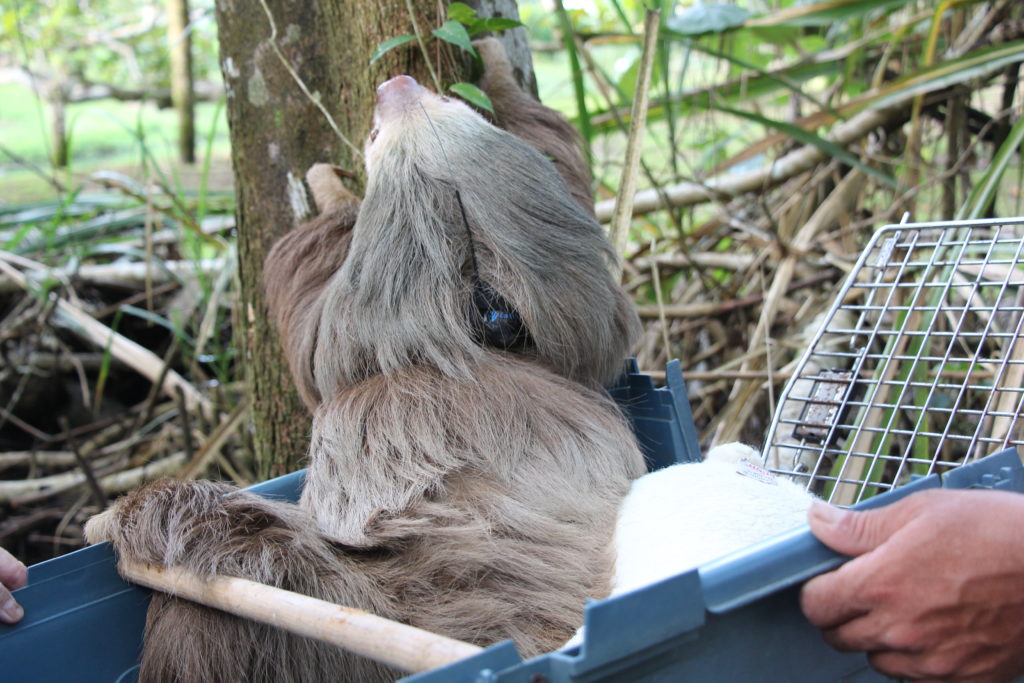 What can we do moving forward?

There will be no convenient solution, but we must work together to find one.

Ultimately it is going to require increased government assistance, funding and collaboration between different rescue centers and release sites throughout Costa Rica. It will require increased transparency and improved record keeping in order to ensure that rescued sloths are returned to where they were found.

Furthermore, it will require the preservation of habitat where these distinct sloth populations are living (since they cannot be brought elsewhere).

When sloths were first being transported around the country, we didn’t know better. Now we do. Equipped with this new knowledge, we can now ensure that our actions to help them will truly lead to a long and healthy future for sloth populations in Costa Rica. 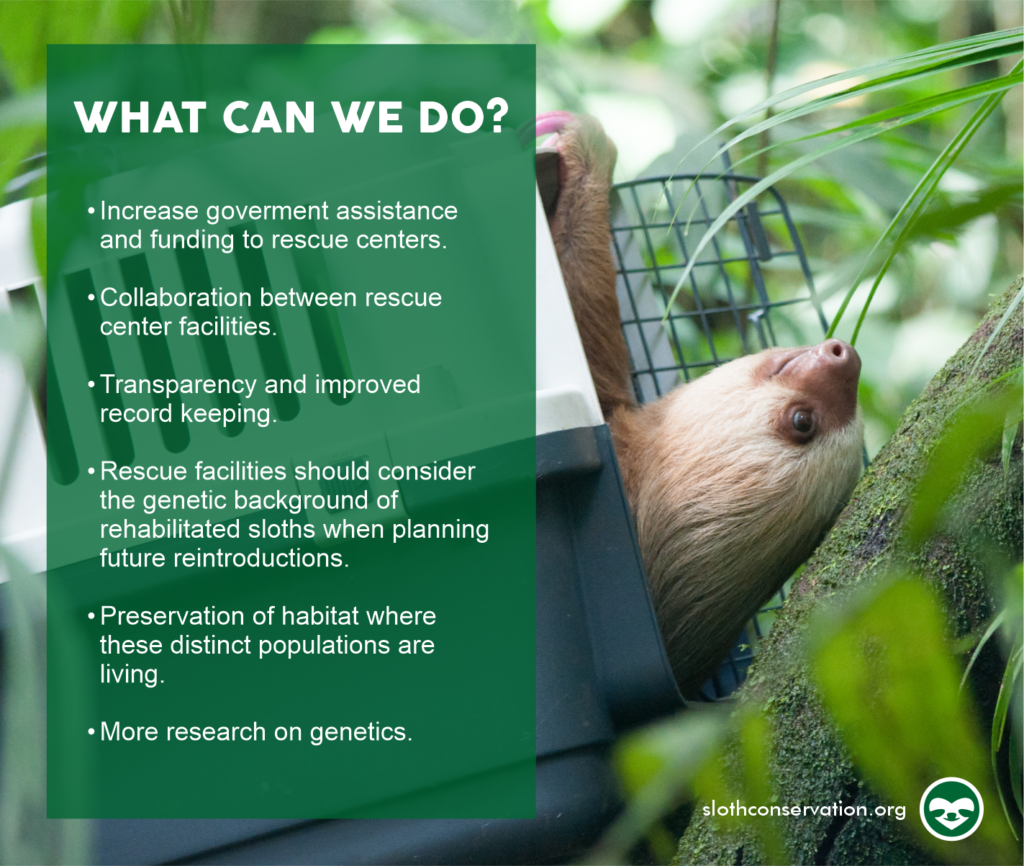